Posts: 4444
Joined: Sun Feb 11, 2007 7:15 pm
Favorite Bond Movie: The Spy Who Loved Me
Favorite Movies: Amicus compendium horror films
It's a Gift
A Night At The Opera
The Return of the Pink Panther
Sons of the Desert
Location: The Duck Inn

Any fans of "Markham"?
Bring back Bond!
Top

Didn't he ghost some of Fleming's Books? 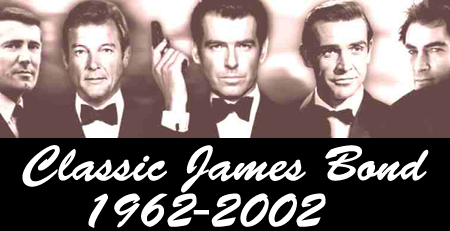 Dr. No wrote:Didn't he ghost some of Fleming's Books?

That has been debated back and forth. Kingsley claims he did ghost. Other's claim if he did it was minor work.
However Ian always said when he sat down to write there wasn't an idea in his head. Part of the reason behind his Thunderball troubles.


klast.net wrote:In 1965, Amis wrote 2 books: the literary critique The James Bond Dossier and The Book of Bond, or Every Man His Own 007 (under the pseudonym of Bill Tanner), a sort of "how-to" guide. It has also been rumored that Amis wrote part of Ian Fleming's last book, The Man with the Golden Gun.

In 1968, under the psuedonym Robert Markham, Amis wrote Colonel Sun, the first James Bond novel published after the death of Ian Fleming. Since Amis knew Fleming's work well, he was contracted by Glidrose, the copyright-holders of Fleming's books, to continue the story of 007. This was despite opposition from Fleming's widow, Ann, who disliked Amis and considered him a "left-wing opportunist" [Lycett, p. 445]. The idea was that other writers would continue the Bond canon, all writing under the same psuedonym, but this was not to happen.

wikipedia wrote:Amis became associated with Ian Fleming's James Bond in the 1960s, writing critical works connected with the fictional spy, either under a pseudonym or uncredited. In 1965, he wrote the popular The James Bond Dossier under his own name. That same year, he wrote The Book of Bond, or, Every Man His Own 007, a tongue-in-cheek how-to manual about being a sophisticated spy, under the pseudonym "Lt Col. William ('Bill') Tanner", Tanner being M's Chief of Staff in many of Fleming's Bond novels. In 1968 the owners of the James Bond franchise attempted to continue the series by hiring different novelists, all of whom were to publish under the pseudonym "Robert Markham". In the event, Amis's Colonel Sun was the first and only Bond novel to be published under that name. Amis also claimed that the producers of the Bond films aked him to write a screenplay based on one of Fleming's novels perhaps You Only Live Twice but the producers were unimpressed with Amis's effort.[6].

Beginning in the late 1970s Amis’s work shows something of a decline from its earlier pitch, with the notable exception of The Old Devils (1986), which won the Booker Prize for that year. In novels such as Jake's Thing (1978) and Stanley and the Women (1984), Amis takes fogeyism and a certain misogynistic bent almost to the point of self-parody. While none of these works is free of Amis’s wit and even of his compassion for humanity, The Old Devils is perhaps the last novel which shows the coherence and complexity to be found in his earlier masterpieces.

This period also saw Amis the anthologist, a role in which his wide knowledge of all kinds of English poetry was on display. The New Oxford Book of Light Verse (1978), which he edited, was a revision of the original volume done by W.H. Auden. Amis took the anthology in a markedly new direction; where Auden had interpreted light verse to include “low” verse of working-class or lower-class origin, regardless of subject matter, Amis defined light verse as essentially light in tone, though not necessarily simple in composition. The Amis Anthology (1988), a personal selection of his favorite poems, grew out of his work for a London newspaper, in which he selected a poem daily and presented it with a brief introduction.[7]

I remember reading that Amis critiqued The Man With The Golden Gun.

I quite like Colonel Sun. He captures the travelogue element of Fleming quite well and it is well written.

I dont see many people on here posting about him,. so i wondered,. any other J Cole fans on the forum?
Top
Post Reply
5 posts • Page 1 of 1