A place for friendly discussions of politics in general.
Post Reply
149 posts

ALE's entire twitter pages are all about one topic---------hating Trump

Already the Democratic establishment is trying to smear those who refuse to vote for either of the senescent pussy-grabbers on offer as being too privileged to care. Research shows otherwise: https://theintercept.com/2020/04/09/non ... o-parties/

Briahna Joy Gray, who served as Sanders' national press secretary, and prominent Sanders surrogate Shaun King quickly took aim at Biden -- and they made it clear just how much the former vice president's platform differed from Sanders' longstanding policy goals.

"With the utmost respect for Bernie Sanders, who is an incredible human being & a genuine inspiration, I don't endorse Joe Biden," Gray wrote. "I supported Bernie Sanders because he backed ideas like #MedicareForAll, cancelling ALL student debt, & a wealth tax. Biden supports none of those."

Additionally, Gray indicated she agreed that it was "almost insulting" for Biden to suggest lowering the Medicare eligibility age to 60, in lieu of adopting universal health coverage.

Gray had also hammered Biden on Sunday after The New York Times belatedly covered a sexual assault allegation against him on Sunday: "I’m not sure how that line from the NYT’s long-delayed coverage of Tara Reade’s accusation can sit alongside reporting that 7 other women have accused Biden of sexual misconduct," Gray tweeted. (Biden's campaign has denied the accusation.)

Who could have foreseen? Well, here's Jon Stewart calling him out on his handsiness five years ago, when he was still VP:
[video]https://youtu.be/-uGBRDcJESQ[/video]
Balls, Q?
Top

Host Chris Wallace countered Pelosi’s claim that Trump did not take the pandemic seriously enough before March by showing video of her walking the streets of Chinatown on Feb. 24 without a mask and encouraging tourists to go there. In the clip, Pelosi said it was “very safe” there. Pelosi insisted that this was not an example of her taking the outbreak lightly, and claimed it was only meant “to end the discrimination, the stigma, that was going out against the Asian-American community."------this is how an insane loser responds to her own claims

CNN, which has already drawn fire for its reluctance to cover a claim of sexual assault against Joe Biden, failed to uncover its own archive footage in which his accuser's mother called into Larry King's old show in what some critics are calling "journalistic misconduct". The Intercept reported earlier that Tara Reade said her late mother once called into CNN’s “Larry King Live” to discuss her daughter’s “experience on Capitol Hill,” where the alleged encounter with Biden took place. Reade didn’t recall other information, such as the date or even year and The Intercept managed to dig up a transcript of the call, but not the video. Tucked away among hundreds of thousands of hours of old archive footage was the long-forgotten clip which came to light Friday. But rather than CNN's team of investigative reporters, it was the Media Research Center’s NewsBusters who exhumed the footage from its own vault.--------CNN---Certainly Not News network

This story is NOT going away now

------ Aides to former 2020 hopeful Sen. Bernie Sanders are expressing their anger about the latest development in a sexual assault accusation against presumptive Democratic nominee Joe Biden after video emerged from 1993 in which the accuser's mother appears to allude to her accusation. "The video of Tara Reade's late mother calling into Larry King to blow the whistle about about [sic] Tara's sexual assault is being met with relative silence from a cadre of progressives right now and I want you all to know that I see you," former Sanders senior adviser Winnie Wong tweeted. "We all do."------The National Organization for Women (NOW) also did not respond to comments. The offices of Sens. Elizabeth Warren, D-Mass., Amy Klobuchar, D-Minn., and Sen. Kamala Harris, D-Calif., former 2020 hopefuls who have been floated as possible VP picks for Biden, did not respond to requests for comment about the latest development. 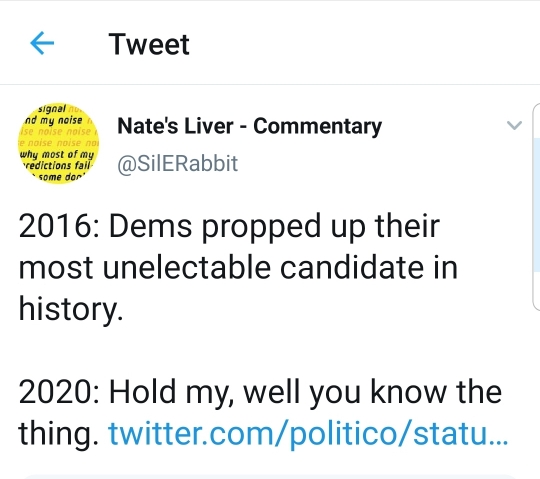 --------Peter Dauo, a political activist and one-time fierce Hillary Clinton backer, took to Twitter Saturday to urge former Vice President Joe Biden to end his presidential bid over new developments in the sexual assault allegation against him. Dauo, who worked for Clinton during her first presidential bid and was a prominent defender of her in the 2016 cycle, took to Twitter Saturday morning to say "Biden should withdraw."

The woman who has accused Joe Biden of a sexual assault in the early 1990s says she's disappointed that CNN anchor Anderson Cooper failed to ask the presumptive Democratic presidential nominee about the allegation when he had the chance -- not once, but twice.

Tara Reade, a former staffer for then-Sen. Biden, told her story about the former vice president over a month ago with progressive podcast host Katie Halper. Since then, Biden has done nearly a dozen TV interviews with news anchors including NBC News' Chuck Todd, ABC News' George Stephanopoulos, and twice with Cooper -- all of whom failed to ask Biden about her public claim.


"I think it's shocking that this much time has passed and that he is an actual nominee for president and they're not asking the questions," Reade told Fox News. "He's been on 'Anderson Cooper' at least twice where he was not asked."-----------PROOF POSITIVE of the media bias, no ifs, ands or buts

The Clinton News Network has removed the video of the Larry King call from their website, in case anyone had any doubt that they are effectively the communications arm of the DNC.

bjmdds wrote:The FCC chairman should STRIP these non-news networks of their licenses once and for all

I don't think the FCC has the power to do that (nor should they, as it's not difficult to see how that power could be abused).

Kristatos wrote:The Clinton News Network has removed the video of the Larry King call from their website, in case anyone had any doubt that they are effectively the communications arm of the DNC.

There is recent history of “news” networks helping political parties or candidates.
If we take ideology out of it is as simple as likes or dislikes. If they like or dislike a candidate they play down incidents or let them retake sound bites the candidate screws up.

What I don’t get is why they are giving trump such quality red meat. Just because they ignore it or trump has a past and shouldn’t be the first to throw stones, they forget he will throw every stone he comes across and it usually hurts who ever his target is more than trump.

Another one gang!——A woman related to a former Republican Senate candidate is accusing former Vice President Joe Biden of sexual harassment, claiming he complimented her breasts at a political event in Delaware when she was 14 years old in 2008. On Friday, the online news outlet Law&Crime reported that Eva Murry, who is now 26, claims the incident happened at Delaware's annual First State Gridiron Dinner & Show in 2008. The outlet said Murry is the niece of Christine O’Donnell, a Republican who ran against Biden for the Senate that year, and often accompanied her aunt on the campaign trail. She claims the comment was made after Biden and her aunt greeted each other. “When it was Biden and my aunt’s turn to say hello he quickly turned to me and asked how old I was," Murry told Law&Crime. "I replied with my age and he replied with the comment, ‘Fourteen? You’re very well endowed for 14!’"

https://www.youtube.com/watch?v=z3zxnnJHKu8 In 2004 this disgrace to humanity thought differently than his party does now.

In 2018, as Governor Andrew Cuomo faced a challenge to his reelection bid in the New York State Democratic primary, he got a last minute $1 million cash infusion from the General New York Hospital Association (GNYHA)—a powerful NY healthcare industry group. On April 2, 2020, he repaid the favor when he quietly signed legislation shielding hospital and nursing home executives from any lawsuits stemming from the coronavirus outbreak. The clauses, inserted into the annual budget bill by Cuomo, gave blanket immunity protections for healthcare industry executive and administrators, the same individuals and institutions that have made a fortune moving sick Covid-19 patients to nursing homes............ He also said America was never great last year! To those here that bought into the notion that this cretin would ever consider running for President, with the media buildup for him recently, should realize now once and for all, he will NEVER be on any ticket in 2020

President Donald Trump has so far received over 140,000 more votes in the Georgia primary than former Vice President Joe Biden. With 70 percent of the precincts reporting for the GOP, Trump has gained 698,825 votes, compared with 552,253 for Biden, with 63 percent of precincts reporting for the Democrats, according to NBC News data. Trump also received more votes than all of the Democratic candidates combined, including Senator Bernie Sanders, who received over 67,000 votes, and Senator Elizabeth Warren, who received nearly 12,000, as well as candidates who dropped out of the race months ago. The president also outperformed former President Barack Obama's vote totals from the 2012 Georgia primary. Obama was running unopposed in the state and got 139,273 votes, over 500,000 fewer votes than Trump has received thus far. Trump has been able to drive up voter turnout, resulting in his getting more votes than Obama did, multiple times already during this primary season. In the Iowa caucuses, Trump got over 30,000 more votes than Obama did in 2012. In New Hampshire, Trump got nearly 130,000 votes, more than twice as many as the former president received in 2012.

Kanye West has announced that he is running for president: https://www.yahoo.com/gma/kanye-west-an ... 00559.html

May as well call off the election, Biden and Trump don't stand a chance

Kristatos wrote:Kanye West has announced that he is running for president: https://www.yahoo.com/gma/kanye-west-an ... 00559.html

May as well call off the election, Biden and Trump don't stand a chance :sarcasm:

He will get bored of it when nobody rushed to tell him how great he is. I think he sees the black vote as his, honestly it’ll hurt Biden who has zero outreach with any minority community, it was a big issue when we were pretending the democrats had primaries and anybody can win. Now we just get behind whoever the establishment dems anoint, Bernie Sanders included. I think Bernie had a shot but he was too scared to take it