A place for friendly discussions of politics in general.
Post Reply
938 posts

The people get it. Oh-bama had the media kiss his rear end and Trump fights their hatred 24/7 and he still tied for the MOST ADMIRED

I don't see how it proves or disproves that Trump is a cult leader (though it must burn him that after three years as president, he still has to share the title with Obama). Anyway, what makes it a personality cult is not his popularity or otherwise (many cults have only a handful of members.) It's the idea of a charismatic leader being regarded as the sole source of truth, and that a free press or the evidence of your own senses cannot be trusted. If the Party says that 2+2=5, then anyone saying that 2+2=4 is a liar. "Alternative facts", as Kellyanne Conway called them.
Balls, Q?
Top

Chuck Todd STILL does not understand that Americans do NOT want illegals here. For Trump to be tied with Oh-bama as the MOST admired man in the world after the lying negativity the media has spewed at him is remarkable

Kellyanne's hubby is a prick who is jealous of Trump and he has lost his mind over it. Alternative facts? Hah

Watch CNN daily for that. Every single thing thy have MADE UP has proven to be false. At this juncture, if anyone STILL believes these outlandish lies being spewed by the media, there is nothing left to discuss. Being entrenched in an alternate reality due to an unhinged hatred of a productive policy President is a sickness, not an opinion, and the left-wing media is headed for a mass suicide next November when Trump is hopefully re-elected and the Democrats lose the House and the Republicans maintain the Senate. The bell will toll on these Democrats very shortly------it's coming------get ready

Chalk up another victory

The CULT FUHRER here won't be able to give him the credit he deserves. President Trump ordered a game-changing U.S. military attack that killed Iranian Gen. Qassim Soleimani, the head of the Islamic Revolutionary Guard Corps' elite Quds Force, among other military officials at Baghdad International Airport early Friday, the Pentagon confirmed. The sad saps at CNN and MSNBC were stone-faced reporting this news. 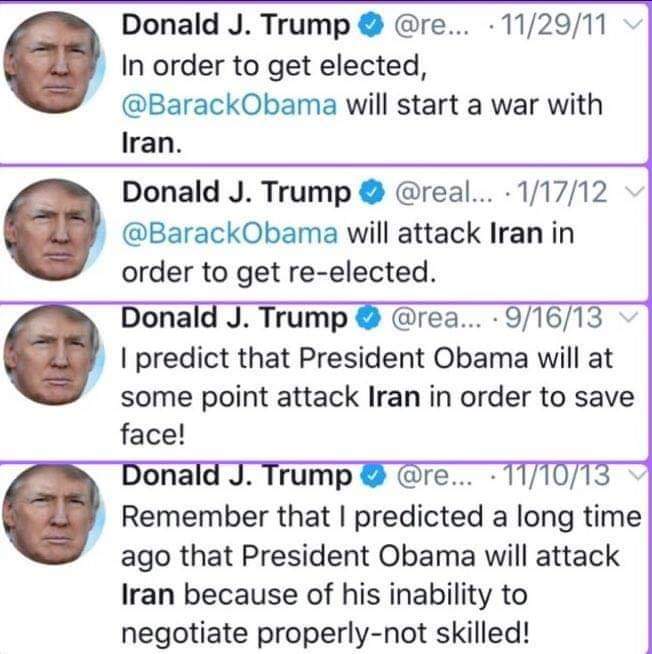 The media is calling this killed terrorist "revered" and a "genius"

Liberalism is now not just a mental disorder. It is a dangerous enemy to this country

On the news, I don’t want to be political about it at all. Please move or delete it if it needs to be.

Not upset about hitting back at Iran should have happened decades ago. Lots of soldiers were killed and injured because of Iran. We knew it for a fact back then and for political reasons did nothing about it.

I am upset more kids are being sent back to that s**t hole Iraq. These kids are younger than the war they are being asked to fight in. Bothers me a lot. Especially because like the generation of soldiers before they’ll be asked to give their lives for essentially nothing. Iraq was won at one point. Stupid Coalition government with stupid us policies gave away all that was fought for. Not that Afghanistan is any better.

We do not need another war in that forsaken part of the world. I don’t believe trump wants to escalate anything there but I don’t think you can ignore Iran trying to take another embassy.

I am waiting to see what happens because of this.

So far the strikes are good, fast and brutal as they should be. A lot of punches were pulled since the start of the war on terror, military might and military planning were not allowed to be freely used. Tactics, weapons and targets were denied by politics in Washington, by both bush and Obama White Houses.

If the military has a free hand to take out and capture targets deemed militarily necessary this will be a completely different story.

A lot of soldiers felt held back and unfairly given restrictions and mission goals that served interest of other parties that were not in the soldiers best interest. Made to police a country instead of do what armies do.

I know people can get the wrong idea about soldiers, some think the army is war happy and soldiers are trigger happy. Maybe some of this is justified, I’m sure there are real horror stories.
But Washington and the public got hooked on the Hollywood ready special ops raids where high value targets are quickly cleaned up with minimal collateral damage. Intelligence is good, weather is nice, air space is clear, it’s done and over nobody gets hurt but the designated bad guy.

Real world is putting thousands of young people doing tasks nobody wants to do, in places nobody wants to go, stories nobody will ever make a movie about, over and over again in territory where there are several nations and groups not wearing uniforms are actively wanting to hurt any us solider and call it a victory. Problem is most of those tasks and reasons for most of those tasks are not militarily important just added mission parameters given for political reasons.

Sorry to rant, this crap has been bothering me.

Omega wrote:On the news, I don’t want to be political about it at all. Please move or delete it if it needs to be.

I moved it here, as I like to keep political discussion in the Politics forum where possible.
Balls, Q?
Top

Omega wrote:On the news, I don’t want to be political about it at all. Please move or delete it if it needs to be.

I moved it here, as I like to keep political discussion in the Politics forum where possible.

no problem. Guess it is political, but my own view is not left or right, just don’t ask kids to fight and die unless we really need to and will allow them to fight to the best of their ability.

Of course there are grey areas. But it seemed to fit better here than in the general discussion thread.

Kristatos wrote:Of course there are grey areas. But it seemed to fit better here than in the general discussion thread.

I agree it’s a better place for it . I’m worked about stuff I hadn’t thought about for years is all

I finally figured out how to change the title of the thread. When it first started, he wasn't president yet, so the question mark at the end was appropriate. Once he was elected, I wanted to change it, but there didn't seem to be an option to change thread titles. But all you need to do is edit the first post in the thread and change the subject line. Seems obvious once you think about it.
Balls, Q?
Top

Ale@aliasvaughn-----Former White House aide Omarosa Manigault Newman alleged in 2018 that President Trump literally ate a note handed to him by his former personal attorney, Michael Cohen, in order to hide its content.--------------She actually wants to believe this garbage.

This is the mentality of those with Trump derangement syndrome

She is beyond hope as are the rest of her CULT

You cannot reason with insane individuals

Changes in labor force participation that appear small in magnitude have important effects on the job market. For example, the increase in the prime-age labor force participation rate under President Trump translates to 2.2 million additional prime-age workers in the labor force. Beyond labor force participation increasing, the employment-population ratio for prime-age workers rose 0.2 percentage points to 80.6 percent in January—its highest level since May 2001. This influx of workers signals increased confidence in the economy and improved job prospects. The January reading of the Conference Board Consumer Confidence Index increased to 131.6, a 31 percent increase from the reading the month before President Trump’s election. Furthermore, the ratio of respondents who say jobs are “plentiful” compared to those who say jobs are “hard to get” is more than 4:1.-------results are the proof of success and the facts do not lie

President Trump celebrates court victory over Democrats in emoluments case. The court ruled that Democratic members had NO standing to sue the president.

FBI mulled interviewing Michael Flynn 'to get him to lie,' 'get him fired,' handwritten notes show

----------------------Arizona police are now conducting a homicide investigation into a woman who claimed she gave her husband fish tank cleaner after President Trump claimed the anti-malarial drug hydroxychloroquine was an effective treatment for coronavirus. The Washington Free Beacon, which first reported that Wanda was a “prolific” Democratic donor and that she had a troubling relationship with her husband that included a previous domestic assault charge, revealed Tuesday night that Mesa City Police Department is conducting a criminal investigation into the death of Gary, and requested recordings of the Free Beacon’s interviews with Wanda. The Beacon also reported that friends of the deceased man were skeptical that he would knowingly consume fish-tank cleaner. “What bothers me about this is that Gary was a very intelligent man, a retired [mechanical] engineer who designed systems for John Deere in Waterloo, Iowa, and I really can’t see the scenario where Gary would say, ‘Yes, please, I would love to drink some of that Koi fish tank cleaner,'” one of his close friends told the Washington Free Beacon. “It just doesn’t make any sense.”

The 6-point jump in Trump’s overall approval rating owes primarily to a bump in support among independents,

according to Gallup. Forty-seven percent of independents said they approve of the president’s handling of his job compared to only 39 percent in the previous April survey.