A place for friendly discussions of politics in general.
Post Reply
997 posts

I get why they want to dismiss him as insane, first point is he’s been this way his entire public life at least that I know. Second point is that they want us to believe somebody mentally unstable out maneuvered then entire GOP, then Democrat party and the media.
So far he’s gotten more done than bush or obama in their first term far as real impact for us regular people without a lobbyist group or former head of state in our pocket.

The plush complexes double as “maternity hotels” for pregnant Chinese women who come to the US to give birth to their anchor babies.

Omega wrote:I get why they want to dismiss him as insane, first point is he’s been this way his entire public life at least that I know. Second point is that they want us to believe somebody mentally unstable out maneuvered then entire GOP, then Democrat party and the media.
So far he’s gotten more done than bush or obama in their first term far as real impact for us regular people without a lobbyist group or former head of state in our pocket.

These leftists/progressives are also using an old Soviet trick. During the Soviet reign, the KGB used “psychiatry” to silence, trash, and delegitimize any political opposition. Ultimately, thousands of dissenters were imprisoned in mental hospitals. In Trump's case, instead of putting him in a cell with padded walls, the progressives just want him impeached because he's supposedly insane and unfit for office.

With each passing day, we see how dangerous these progressives are. And as they brand Trump a whack job, their message is clear: only a mentally deranged person would challenge political correctness, expansion of big government, redistribution of wealth, socialized healthcare, man-made climate change, multiculturalism, out-of-control open borders, the media's credibility, etc.
Top

The comments were recorded in an interview with The Atlantic. The wide-ranging interview was based on Obama’s foreign policy over his eight years in office. During one portion of the interview, Obama said described Libya as a “mess” to the interviewer but behind closed doors called the country a “s**t show.”

He was (accurately) describing his own failed intervention in Libya. Not quite the same thing.
Balls, Q?
Top

Trump f’d up. s**t house or s**t hole who cares he played into the democrats hands who were already hyperventilating about immigration.
The only out is if he can prove Hoyer lied about what trump said but it sounds like trump and it’s been repeated continuously for days so the damage is already done.
I don’t like Hoyer for a lot of reasons but that crap line of telling trump the term chain migration is offensive to American American ought to piss everybody off. It very clear what the meaning of the term is about, to try to twist it into some sort of reference to 19 century slave trade ought to be the definition of stupid.

Oh I have not kept up on this New this week cause I really don’t care but there was one reporter who said the republicans going into that meeting told trump all the concerns he addressed were taken care of in that DOCA bill but when trump looked at it the opposite true so that’s what put him in a bad mood.

No damage big O whatsoever. It won't affect one Trump voter, nor the Rust Belt states. I could care less what the media thinks of him. It's now a cultural war, with no civility towards our President, so the media can go screw themselves and rot in hell already. I am DONE attempting to figure out why demented liberals act the way they do. They are sick, vicious, lowlives in the media and in Congress

---------Kentucky Sen. Rand Paul brushed off suggestions that President Trump holds a racial animus against Haitians because he once supported Paul’s trip to the Caribbean nation to do eye surgeries on poor Haitians. Paul said on NBC’s “Meet The Press” Sunday that Trump donated money to a medical mission trip Paul took before he was president. Paul did about 200 surgeries on Haitians that allowed them to see while he was on the trip, and he said that’s evidence Trump isn’t prejudiced against the country.------------- I am telling you the front runner for the Democrats for 2020 is Mario's son, dandy Andy, the corrupt Cuomo loser, who has delusions of grandeur that he would be popular outside of Liberal-Land NY. Frail and feeble Biden? Trump slaughtered all of Oh-bama and Biden's bad actions in 11 months, and the country is NOW on the correct path. This immigration issue will be a civil war within our country and middle America will win because the silent majority is fed up with liberalism and the chaos that ensues with it.
---------------------------------------------------------

2018 SurveyMonkey poll results: Among African Americans and Hispanics, reactions to Trump depend more on gender than age or education. In every age group, and at every level of education, about twice as many African American men as women gave Trump positive marks. In all, 23 percent of black men approved of Trump’s performance versus 11 percent of black women. “The outlier here isn’t [black] men … it’s [black] women, where you have near-universal disapproval of Trump,” said Cornell Belcher, a Democratic pollster who studies African American voters. Still, black men are one of the few groups for which Trump’s 2017 average "approval rating significantly exceeds" his 2016 vote share!

bjmdds wrote: No damage big O whatsoever. It won't affect one Trump voter, nor the Rust Belt states. I could care less what the media thinks of him.

BJ, if anything, Trump seems to have gotten good results from this controversy. Dr. Alveda King, niece of MLK, has kind words for him:

“I agree that President Trump is not a racist. He has done so much,” King told host and Breitbart News Washington Political Editor Matthew Boyle.

The other thing is, two new polls show Trump’s rising support from black voters, highlighting his success from pushing employers to hire Americans instead of lower-wage migrants. It's related to the Survey Monkey info you posted above. The article I saw was on Breitbart:

I remember Trump, during one of his campaign rallies in 2016, asking the black community, "what do you have to lose?” by voting for him. Now, it seems they're seeing what they have to gain from his presidency. If this support level holds, it'll be a disaster for the democrats this November.


I am telling you the front runner for the Democrats for 2020 is Mario's son, dandy Andy, the corrupt Cuomo loser, who has delusions of grandeur that he would be popular outside of Liberal-Land NY.

Thanks for the good news!!! This Cuomo dude is soooo far to the left that even liberals I know can't stand him. His ideal running mate is de Blazio, another far-left loon. His campaign manager would be Carlos Danger, aka. Anthony Weiner.
Top

A Norwegian family declines President Trump's offer to move to the US: 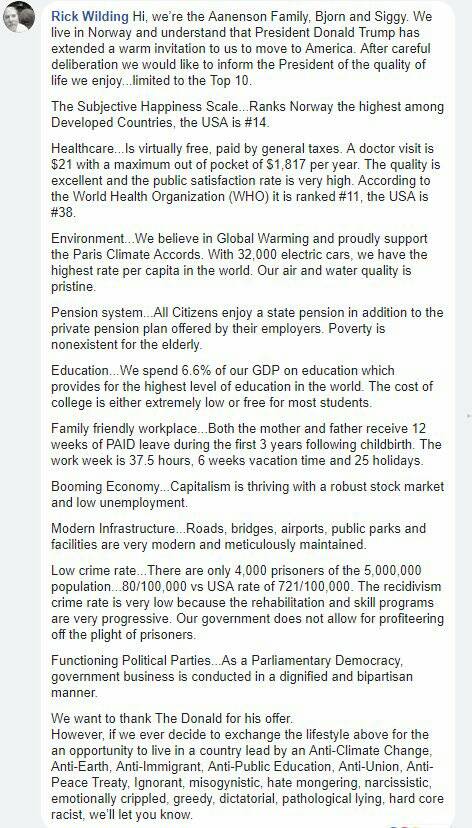 Traditionally deep-blue Minnesota is trending red; one sign of this is that Donald Trump lost the state to Hillary Clinton by only a point and a half. Yesterday the Star Tribune released its latest Minnesota Poll. The paper’s headline was “Minnesotans divided over Trump; majority sees him as temperamentally unfit, dishonest.” But if you look at the actual poll results, they tell a different story.

The basic finding is that 45% of Minnesotans polled approve of Trump’s job performance, while 47% disapprove. Trump scores 89% approval with Republicans, and 46% with independents. There is no mystery about what voters see in our president: on the economy, Trump scores 54% approval against only 39% disapproval. 92% of Republicans, 63% of independents, and even 9% of Democrats approve of his “handling of the economy.”

The real takeaway here is that the Democrats’ daily effort to distract voters from noticing what the administration is doing with hysteria about Trump’s personality, “Russia,” etc., isn’t very successful, at least not in Minnesota. And paychecks haven’t gone up yet, following the GOP’s tax reform. If the economy continues to be strong and Trump avoids too many self-inflicted wounds, he is well-positioned to carry Minnesota in 2020.

------Apple (AAPL) is making a major investment in the U.S. economy

In a release on Wednesday afternoon, the world’s largest publicly-traded company said it would make a “direct contribution” of $350 billion into the U.S. economy over the next five years. The company said this number does not include ongoing tax payments, or tax revenue generated by wages paid to employees or sales tax on Apple products. Apple said it capital expenditures, a tax payment due to repatriating overseas profits, and investments in manufacturing in the U.S. will account for $75 billion of its contributions. The company also said it will invest $30 billion to create 20,000 new jobs at existing campuses and will also open a new campus in the U.S. In 2017, President Donald Trump said that Cook told him the company committed to build three manufacturing plants in the U.S., according to the Wall Street Journal. “I spoke to [Tim Cook], he’s promised me three big plants—big, big, big,” Trump said to the Journal. “I said you know, Tim, unless you start building your plants in this country, I won’t consider my administration an economic success. He called me, and he said they are going forward.”

Apple is getting one hell of a sweetheart deal to repatriate billions of their money to the us, this is the least they could do.